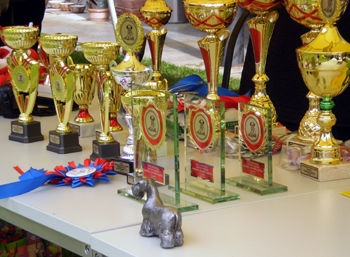 Cesky Terriers and their owners came from all around the world to the beautiful town of Telc in southern Bohemia at the beginning of May for the twenty-fifth anniversary of 'The Days of the Cesky Terrier'.

Team Ridley were represented by Pamatka and Xanthe, whilst Gregg and Sandy Bridge-Chase (who own Ridley Urana) came from the USA, Cissi Holmgren was there with a daughter of Ridley Ulita and Kirsten Toftkjaer took DoDo and Erann - who are Pamatka's gt-grand-daughter and gt-gt-grandson respecively - from Denmark. 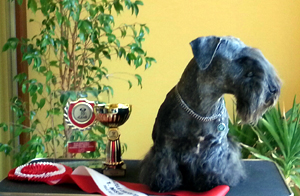 We all had a great time. Xanthe and Pamatka were both placed in the working test. At the club show, Cissi's bitch took the CAC and the Club Winner title, DoDo had the Res CAC and also passed her bonitace, Pamatka won the Honour Class and also the Horak Memorial Trophy -
the second time she has had this award - and Erann starred as the model for the grooming demonstration. 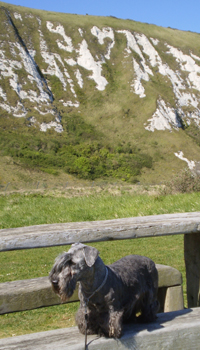 It's a long way - but well worth the 2000 mile round trip. We had a wonderful time, with lots of friends, some we have met before and some new ones as well. It's always good to arrive back home in England though and, as we often do when we travel abroad, we stopped for a little break at Samphire Hoe, where there was the opportunity to stretch our paws beneath the white cliffs of Dover before setting off on the last leg of the journey home to Lincolnshire.

Telc, where Cesky Days is held, is a UNESCO World Heritage site.
Next
Previous