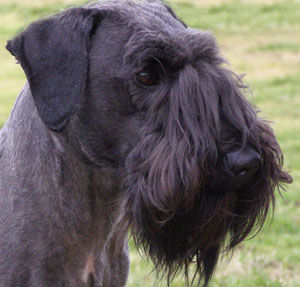 The team had a temporary new member recently, when Felix and Erik came to stay. Their owner, Brenda, had a bad fall resulting in three broken ribs and a stay in hospital, so Tomas and Xaver went down to Surrey and brought them home to stay wih us, whilst Brenda's other Cesky Terrier, Mabel, had a holiday with another friend for a few weeks.

Felix is a venerable old gentleman, nearly fifteen years old, and rather deaf. This meant he never heard his name being called when it was time to come in from the garden (although he came quickly enough when it was dinner time!)

He visited us once, a long time ago - even before Tomas was born - as he is the sire of the 'R' litter. This is a photograph of him 'in his prime'. 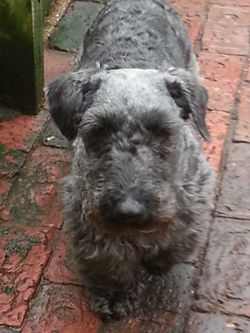 Erik is dad, grandad and great-grandad to the team, and we decided that he should come home permanently. He soon settled back in and is now busy growing his coat, but you will be able to pick him out this summer, as he's the one with a crew cut, rather than a forelock!
Next
Previous