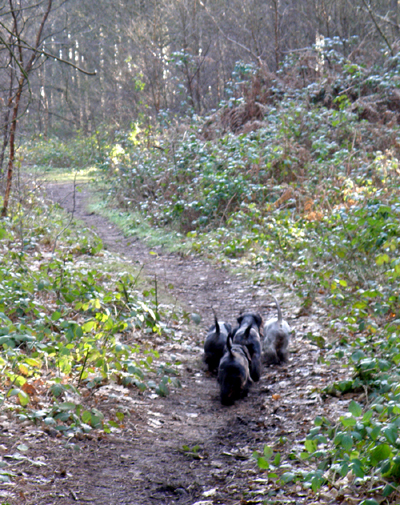 We are very lucky in that we have several wooded areas close to our home. The forest is the Cesky Terrier's natural habitat, and although we don't have any Wild Boar to hunt, the team spend many happy hours using their noses to track the scents of the animals that do live in the forest.

Cesky Terriers are naturally obedient, but it is important that when they go out in a group they are completely under control, so that they don't bother other people or their dogs. 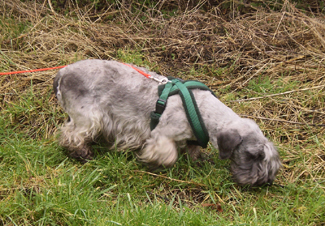 Here in the UK tracking dogs are used to search for injured deer, rather than Wild Boar. Large animals such as these rarely drop immediately, even if fatally injured, since an adrenalin surge will carry them along for some distance. For welfare reasons it is important that the injured animal is found and, if necessary, despatched humanely.

A tracking dog can follow the scent given off by the animal through dense forest.

We have tried several different harnesses, but now use and recommend Fleece Dog Harnesses for Cesky Terriers. They are sturdy and hardwearing, but at the same time soft and comfortable - and easy to keep clean. 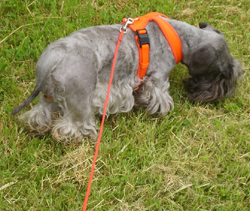 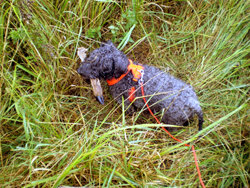 Xanthe can be spotted quite easily in dense undergrowth! The first time she did a track the heavens opened and the thunder was rolling around, but despite this she worked with accuracy and enthusiasm, and proudly carried her reward back.

Six different species of deer have been recorded in Lincolnshire. These are Red, Roe, Fallow, Muntjac, Sica and Chinese Water deer, with Roe and Muntjac being the most common. The deer population is on the increase throughout the county. Learn more about these elusive and fascinating creatures from the Lincolnshire Deer Group.