RIDLEY CESKY TERRIERS have been at the forefront of establishing this breed in the UK. 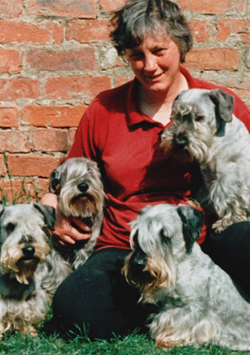 In the last thirty years, fourteen imported Cesky Terriers - nine from the Czech Republic, two each from Poland and Denmark and one from Canada - have made their home at Ridley, laying the foundations of correct type and temperament.

I have judged Cesky Terriers in Sweden, Denmark, Finland and in the Czech Republic as well as in the UK.

For many years I visited the Czech Republic on a regular basis. I have learned a little of the language, and as a result I have been fortunate to spend many hours in the company of the breed's most knowledgeable experts and judges, gaining valuable insight into the strengths and weaknesses of the various kennels. 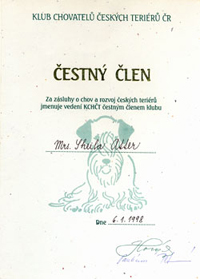 In 1998 I was made a 'Member of Honour' of the KCHCT (Czech club for breeders of the Cesky Terrier) for my work in promoting the breed in the UK.

The Cesky Terrier is a Czech breed, the creation of one man, Frantisek Horak. We in other countries have no right to alter it.

My aim has always been to breed Cesky Terriers that are identical in type to those found in the breed's homeland. I will never compromise my understanding of the breed for the sake of fashion or showring success. 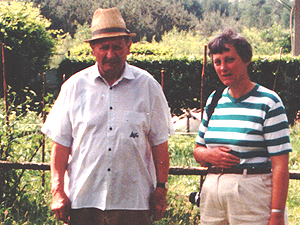 During his lifetime I was helped considerably by the advice of Mr Horak with regard to my breeding programme. Since then I have worked closely with his daughter, Jitka Paulinova.


With Mr Horak at his home in Klanovice in 1992

In 2001 and 2002 I was privileged to judge the Horak Memorial Trophy at the Czech Club Show, and in 2005 my own Abba Melina Bohemica won this prestigious award. In 2007, Nadherna Nina Ridley won the CAC, and in 2012 her half-sister Ridley Pamatka won the Champion class and the CAC, whilst Oneva Eduard Malsville was victorious in the Champion Male class. In May 2011 I was honoured to judge the Club Winner Show in Hrdonov, Southern Bohemia.

In 2013 Pamatka did even better, and surpassed my wildest dreams by winning not only the CAC, but also the title Klubovy Vitez (Club Winner) - the highest award a Cesky Terrier can gain - and the Horak Memorial Trophy, whilst in 2017 she again won the Horak Memorial competition as well as the Honour Class. 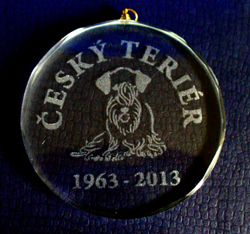 To mark the 50th Anniversary of the recognition of the breed by the FCI, the KCHCT commissioned fifty medals, to be presented to fifty people who had made a contribution to the development of the breed worldwide. I was both humbled and honoured to be the only person from the UK to be presented with one of these.

There will always be 'instant experts'. For those who would prefer to have an accurate and informed opinion, what knowledge I have about the Cesky Terrier is always freely available to anyone wanting to know a little more about this breed.

Ridley Cesky Terriers have been the foundation for several other breeders in the UK. Komidion, Pendevour, Gayteckels and Woodstrode all started with a Ridley bitch.

I have always endeavoured to breed Cesky Terriers of correct type, healthy and of good temperament. I took my adults to the Czech Republic for their bonitace or breeding examination. Whilst this is not necessary in the UK, it is a requirement before breeding in the Czech Republic. The test evaluates type, temperament, conformation, dentition and size.

I am committed to the welfare of this lovely and unique breed. I no longer breed but if you want to learn a little more about Cesky Terriers or to meet TEAM RIDLEY, please don't hesitate to get in touch. 'Talking Cesky' is one of my favourite occupations!